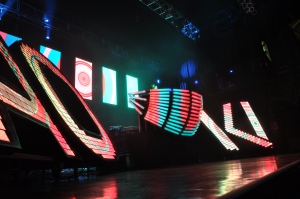 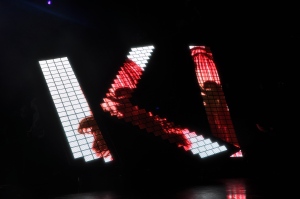 Let’s just say, it was a freaking awesome dance party just like Steve and Datsik warned me in their pre-interviews. The DEADMEAT Tour is definitely one show not to miss this year. Although biased as I am a huge fan of both artists, I’d say the audience agrees with me when I say that was one of the best shows I’ve been to. It was full of intense fun and immense energy at all points of the show, everything a concert should be. Playing to a sold-out crowd, both headliners gave body-lifting performances to celebrate Steve’s ‘Wonderland’ album and Datsik’s signage to DIM MAK Records.

At around 9:30 p.m., Datsik hit the stage. After the openers the crowd was so amped up and ready that I couldn’t even make it to the photo pit without being thrown around a couple of times. Datsik, known for his heavy bass and hardcore dubstep, played a surprising set of a variety of sounds. He’s moving more into the hip-hop scene, straying more from dubstep with ease. It’s obvious that Datsik is extremely talented and able to incorporate a myriad of different sounds to make his set flow and manage to also stay original. Working on his debut album coming out soon, this tour is just a preview to what Datsik can really do with the tempos and beats that are his realm of musical creation.

When it came time for Aoki to take the stage, everyone just about went crazy. The fans went wild, screaming “AOKI, AOKI, AOKI” and I even got yelled at for trying to pass some fans. Promoting ‘Wonderland,’ he played almost every song from the album as well as some collaborations he’s done in the past such as “Warp 1.9″ with the Bloody Beetroots. Not only was his delivery phenomenal, the aesthetics of Aoki’s stage were astounding. He had his name in huge florescent LCD letters across the stage with a light and video show that produced a loud and colorful presence. However, Aoki’s performances are trademarked by his absurd actions rather the set he’s playing. A couple of times in his set, he climbed to the second floor balcony just to leap into the crowd below who were holding up a blown-up mattress for him. He threw champagne, orange and cranberry juice into the sweaty mess of dancing teenagers and topped it off by tossing a large cake into the faces of some front row fans. His performance was full of the energetic house music he’s famous for, which kept the crowd begging for more. Everyone was dancing even the bartenders. He closed out the night with “Cudi the Kid” and the crowd sang along to every line, wishing the night wouldn’t end.

Steve Aoki and Datsik truly gave us a night we’d never forget; I promise you I won’t. With another month left in the tour, I suggest you go buy your tickets now. The DEADMEAT Tour is an experience I wish upon everyone; a party that you cannot miss. Yeah, I might have left without being able to hear for the next few hours, but it was so worth it.