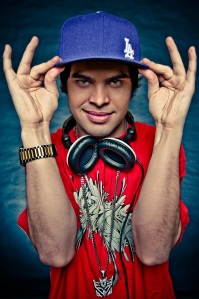 Recently signed to Steve Aoki’s Dim Mak Records, dubstep and hiphop producer Datsik has been having the time of his life. Currently working on his debut album, he’s taken off headlining a tour with Steve Aoki. Considering his first release was in 2009, it’s been a chaotic and successful few years for Datsik. He’s worked with names such as Bassnectar, Diplo and the Crystal Method, and there’s so much more to come from him in the near future. Datsik took some time to talk to Muse writer Alexandria Chong about getting a record deal and some of his inspirations.

Alexandria Chong: You just recently got signed to the label Dim Mak Records, how does that feel?

Datsik: It’s good. I joined a solid team of cool people. Everything’s been really professional and it’s been wicked fun. It feels good to be on a more established label. It’s opened so many new doors and opportunities. For example, this tour and even this interview. It’s been really fun.

AC: What’s going on musically with you right now, rumor is that your debut album is coming pretty soon.

D: Yeah the album’s coming out soon, but I have other stuff too, with different tempos. Electro, hip-hop, all sorts of tempos. I also just started my own record label and I’m working on my own EP for that, but a couple of months from now after my Dim Mak record drops. But while being on tour it’s hard to also do the EP, but it’s coming together.

AC: What is your favorite thing about creating music? Most challenging?

D: I like the solitude, being my own boss at all times, have a nice time alone where I sit and develop ideas. It’s cool when I’m DJ’ing and playing in front of so many people and always surrounded by so many people. It’s a really nice balance between being a DJ and making music, doing a big show and having down time, playing with people and then chilling at home. It’s good to work on tracks, test those ideas and see how it works. I think it’s necessary to have both, [you] can’t do one without the other. I will say I feel weird if I’ve done one thing for too long, if I’ve sat in the studio for 4 months and can’t play, it gets really weird. The new stuff becomes stale to me if I don’t get to play it and the other way too.

AC: Are there any songs of yours that you are particularly proud of and why?

D: “Double Trouble” with Z-Trip, it’s a blend of my old style with new style, super hip-hop, and Z-Trip is cool to work with. All my other songs are good too, I’m stoked about those and any of my tracks with Bassnectar, I’m really stoked about.

AC: What’s it been like on the “DEADMEAT” tour with Steve Aoki?

D: It’s a lot of fun, the crew is awesome, it’s been jokes the whole time. Steve is the coolest dude ever and like a big gambler. He’s really my enabler; we’re constantly gambling over everything. We’ve had high stakes rock paper scissors, poker bets, it’s just really fun and competitive at the same time. We always have fun.

AC: Describe what can a fan expect coming to one of your performances?

D: Don’t expect dubstep the whole show. I try anything and everything I feel, a lot of hip-hop, electro, dubstep…variety in my set is very important. It’s whatever I’m stoked on.

AC: How is your music different from the past?

D: I used to do a lot of dubstep, it’s more hip-hop now, a mix of sounds and genres that’s progressed a lot. The change in dubstep was super bass stuff, now it’s gotten nosier so I’m trying to keep up and do different formulas but stay as original as I can without falling into trends. The production side feels tighter but I still try to keep the original that people like.

AC: Who has been your favorite collaboration thus far and who would you like to collaborate with in the future?

D: Bassnectar, Z-Trip, Infected Mushroom. I did a total weird combination of me: heavy dubstep, Infected Mushroom: full on trance, and Jonathan Davis from Korn; it was such a weird combo but worked really well just ‘cause it was so weird. It shows you can take anything and mash together and have it sound good. I would love to collab [sic] with Method Man in the future. As growing up he was a huge influence so I want to pay tribute to him.

AC: When you’re not performing your own show, whose show would you be at?

D: Bassnectar, he’s really such a cool guy and unique. Any hip-hop ‘cause it’s so much different. I go check out anything, any dope headliner comes to tour at home, I go check it out like to remind myself why I got into this in the first place…so yeah, I check out everyone.

AC: If you each had to select one role model in the music industry, who would it be? Why?

D: I know he comes up a lot but Bassnectar. When I first got into it I looked up to him and then getting to work with him, he’s such a nice dude, willing to share his knowledge and I knew I picked right.

AC: Is there anything else you’d like to tell the readers?

D: Yeah come check out DEATMEAT. It’s insane, two completely different style and mash together and it works so well. Steve’s the fun, melodic, mainstream house vibe and I’m the dubstep, hip-hop, everything else vibe. We get along so well on stage and jump around with each other. It’s an awesome part and if you’re reading this, definitely come check us out, it’s just an awesome f***kin party.