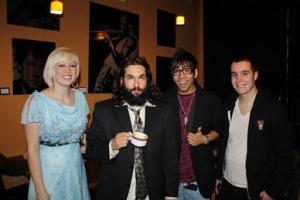 After two EPs, Farewell Continental has released their debut full-length album and success is well under way for this indie pop-punk band. Based out of Minneapolis, MN, Farewell’s members went under aliases until this album. The band took on names from Harrison Ford movies because they wanted fans to enjoy their music without knowing their true identities (Justin Pierre’s love of Harrison Ford likely didn’t hurt either.)

Farewell Continental listed its members as Allie Fox (Kari Gray) on vocals/keyboard, Dr. Richard Kimble (Justin Pierre) on vocals/guitar, Rick Deckard (Thomas Rehbein) on guitar/vocals, Dr. Norman Spencer (Jim Adolphson) on bass/vocals, and Jack Ryan (Josh McKay) on drums/vocals. The release of ¡Hey, Hey Pioneers! confirmed and established Farewell Continental as Pierre’s side project from main band Motion City Soundtrack. Members Thomas Rehbein and Jack Ryan have also gained success in the music industry as members of Small Towns Burn a Little Slower. The release of their debut album coincided with the kick-off of their first and only US tour for this album and year.

Starting off with “Seasoned Veterans,” a giveaway that the band is related to Motion City, Pierre’s distinct voice intertwines beautifully with Gray’s melodies, making the song a great start to the album. Each song features a switch off of the two male and female lead vocalists, allowing their voices to mesh beautifully. Fox takes the lead in second song “Capybara,” which sounds like a garage band pop punk song.

The talent doesn’t stop there. Not only are the songs pleasing to listen to, they each were designed to display the band’s quirkiness and individuality. For instance,“Seasoned Veterans” features snip-bits of Pierre playing the, rarely used, recorder. “Radio, Radio: Are You Getting This?” features a local radio DJ guest mixing on the track and “The Explorer Settles Down” has a specially made pedal called the “WTF pedal” which replicates the sound of lasers. “Capybara” includes Rehbein playing guitars by throwing scissors and screwdrivers at them and also incorporates video game sounds. The band’s weirdness allowed them to acquire a unique sounding edge on these tracks.

“Radio, Radio: Are You Getting This?” is a definite highpoint on the album, starting off with a strong guitar riff then moving onto indie pop tones. There is an energetic pop to the way the vocalists sing this song. There is also a short dialogue where the band tells their hope for the future of their music, as if they are actually talking to their listeners, and it is an awesome touch to their album. The band states, “It’s really interesting when a band gets together / And thinks I wanna do something that’s been done before a million times / Farewell Continental, you can see this weekend.”

Other mention-worthy tracks include “Immolated” and “I Feel Everything (Can You Feel It As Well?)” Both feature amazing instrumental talent, the drums, keyboards and Rehbein’s noises. Each song also has a touch of a different music genre, from jangle pop songs to indie rock. The album has some straight pop rock songs but also electro dance ones.

¡Hey, Hey Pioneers! is a great debut album that showcases Farewell Continental’s less-than-mainstream sound with their indie touch and female vocalist. There is a lot of room for this band to grow and the cohesive meshing of Fox’s voice and Pierre’s distinct vocals blend together in a way that exemplifies how talented this band really is. The instrumentals are also extremely strong on this album and the band’s unique additions, such as video game noises, add extra layers to the music. The band sets itself apart from punk rock acts out there and deserves to be recognized for their creativity. Buy this album and you’ll be sure to discover something unparalleled!

Rating: 8/10
Release Date: May 10, 2011
Record Label: Paper + Plastick
For Fans Of: Motion City Soundtrack, Weezer, Zolof The Rock And Roll Destroyer
Recommended Tracks: “Radio, Radio Are You Getting This Loud And Clearly?” // “I Feel Everything (Can You Feel It As Well?)” // “Immolated” //
Twitter:@TFCGofNA
Facebook: www.facebook.com/pages/Farewell-Continental/146401665400854
MySpace: http://www.myspace.com/farewellcontinental
Purchase: Web Store / Amazon / iTunes